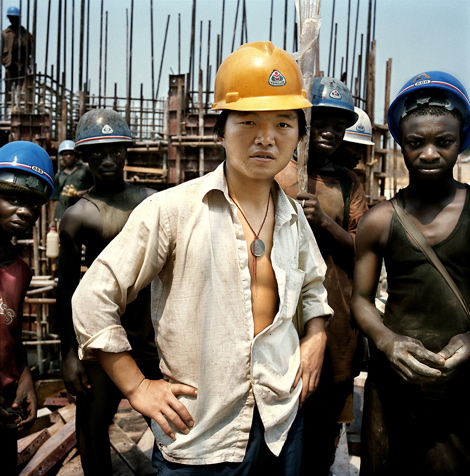 On the building site of the Imboulou dam, Republic of the Congo, 200km north of the capital Brazzaville. In the foreground a Chinese worker of the China National Mechanical & Equipment corporation (CMEC) company, which in 2001 has obtained the contract. With its 120 megawatts, this power plant will double the national production of electricity and will give light to a large part of Congo. 400 Chinese technicians and qualified workers supervise a Congolese workforce of a thousand man, paid 3 dollars a day, that disappear as fast as they can find a better paid job. This, in part, explains the damâs construction delay that has to be absolutely terminated by 2009, the year of the next Congo elections. CMEC requires the Chinese workers to wear yellow and the Congolese blue hardhats.